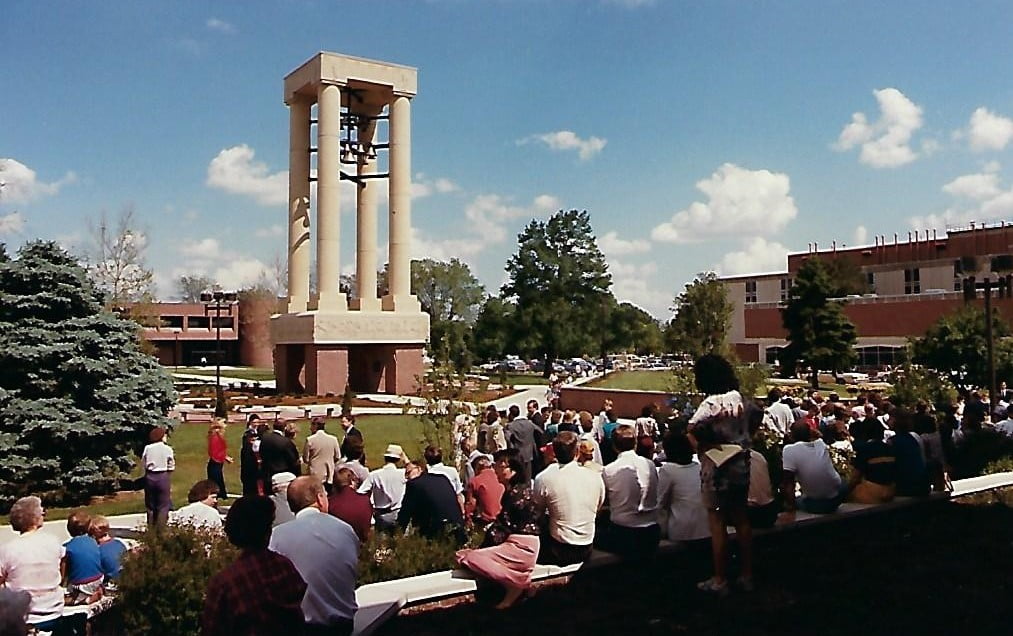 Okay. You graduate from the small town of Giltner, Nebraska, major in architecture at UNL, and send out just four resumes. One of them to Jack Wilkins, with the architectural firm of Jack D. Wilkins and Associates located in Kearney, Nebraska. Not too far from home.

Within a couple of weeks, you get an interview with Wilkins and start to work the next week. Over the next 37 years you eventually buy the company, eventually sell the company, and retire. Maybe exercise your artistic side with some wood working.

If that is you; then your name just might be Jeff Hinrichs, the same Jeff Hinrichs to be seen, just out of college, at the top of the structure inspecting the welds on what will one day be the Memorial Carillon Tower on the KSC and later UNK campus. This is the tower envisioned to honor the families of George and Venetia Peterson and Elias and Mary Yanney and their success in America since their immigration from Greece.

And there is another team, the general contractor, Central Contracting with Steve Beall and Steve Lentell.

And still another team from the campus. Meeting in President Nester’s office in the Administration Building. Everyone getting the sense that Bill Nester is in charge of this. He will be a hands-on client, a client with both a vision and a desire that the new tower “fit in” with the campus. And President Nester has his team too—among others, Earl Rademacher-projects take money-and Bonnie Mumm-projects take communication.

Start with sketches and scaled study models of the vision to verify that it will fit with the scale and architectural style of the campus. Keep within the budget, so eliminate the brick core with its clocks. But keep the four columns symbolizing the columns that adorned the old Administration Building which was the first building on campus.

Order the bells from France. Lots of translation necessary to do business with France. Different language and the metric system of measurement. No margin of error for misunderstanding. Heavy weights will hang from high above.

Get noted KSC art professor Ray Schultz to oversee the molds for the siding—the Greek reliefs from the old Administration building, stored all this time—but relieved of some of their more glaring reproductive parts. Survive the controversy that was not in your job description.

Take it step by step as the edifice rises from the campus quad. Just out of college, remember. And now at the top, looking down. On top of the world, looking down on your creation. Everything in place by the time of the dedication. Well, everything but the eventual spikes to ward off the pigeons that occasionally fly over from the statues by Thomas Hall.

And, voila, Nester’s dream, the Peterson and Yanney family gift, the campus landmark, a major piece of monumental art!

Whatever did the space look like before. Few can remember. No one even seems to try! 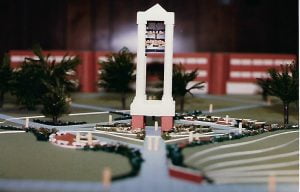 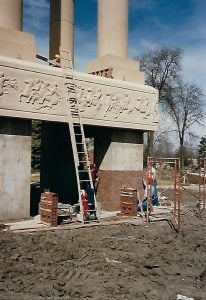 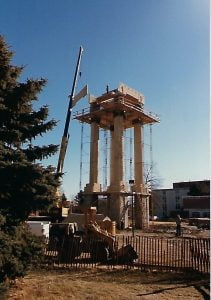 Photo of the tower rising under construction 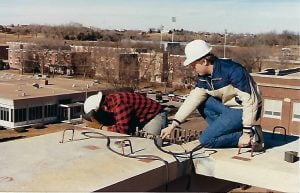 Architect Jeff Hinrichs atop the carillon under construction 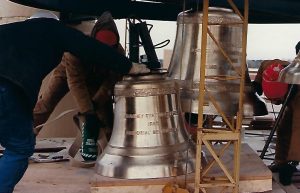 Bells for the tower, from France 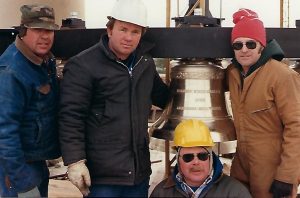