G W Frank Museum of History and Culture is a living history monument that's dedicated to exploring Kearney's past as a way to better understand our present and future.

The G W Frank Museum of History and Culture is a significant component of the Kearney area, and its story offers a long and rich historical look into Kearney’s early development. Located on the University of Nebraska at Kearney (UNK) campus, the Frank Museum (as it is more commonly known) serves its community as a history museum, preservation and research archive, event space, and local cultural center. Located in one of Kearney’s most historic properties, a Richardsonian Romanesque mansion was built in 1889 and now is listed on the National Register of Historic Places.  Architect George William Frank Jr. designed the house for his parents, George Sr. and Phoebe Frank. It was completed in 1890 and featured a pink Colorado sandstone exterior, several fireplaces made with imported tile, handcarved oak woodwork and a large stained-glass window

The museum provides educational opportunities through guided tours, exhibits, special programming, artifact collection, internships, and continuous research. It also functions as a hands-on experiential learning lab for University of Nebraska-Kearney students and faculty. Mainly, the Frank Museum is dedicated to exploring the culture and history of Kearney through collecting, preserving, and sharing the stories of the many people, events, and institutions associated with its past.

Born in 1831, George Washington Frank came to Kearney in 1871 on a business trip. He instantly saw Kearney’s potential, and immediately made plans to invest and build the area, purchasing 1,042 square acres of land from the Union Pacific Railroad. He then returned to his home in Corning, Iowa for a time, but returned to Kearney in 1885 with his wife Phoebe Frank (née McNair). Together, they decided to lay down some physical roots and contracted their son George William Frank, Jr. (a Harvard-trained architect) to build a grand, showpiece home which would reflect not only their success, but their overall permanence. The house included all of the most modern amenities available at the time (electricity, hot and cold running water, plumbing, and pocket doors to name a few), as well as intricate hand-carved woodwork, imported fireplace tiles, and a genuine, comprehensive opulence that captured the spirit of Gilded Age American wealth.

During these years, George established the George Frank Improvement Company with the help of his son Augustus Frank. The company did exactly what the name suggested: improved Kearney over the next 10 years. Some of these developments included financing the construction of the Kearney Canal, starting an ice delivery company, building Kearney’s first hydro-electric power plant, and owning and operating an electric trolley car railway throughout Kearney – two years before San Francisco installed their famous streetcar lines. George Frank also owned a horse ranch, and tried to start a cotton growing and processing business, going so far as building an operational cotton mill in 1890. A fire destroyed the mill in March 1922. Today, the land the mill occupied is home to the locally popular Cottonmill Park located just west of Kearney.

During the early 1890s, it seemed like nothing could slow the Frank family down. However, a historic and countrywide financial disaster changed their course forever. The Panic of 1893 hit the Frank family especially hard. The banks in the United States - including those in Kearney - started failing, people started moving away looking for jobs, and George Frank’s businesses were unable to recover their investments. Facing mounting debts, the Franks started selling off sections of their land. One parcel, now the site of UNK’s Warner Hall, was sold to the state of Nebraska and, in 1903, became the site of the State Normal School, the organization that eventually became the University of Nebraska at Kearney.

After trying and failing to pay down their debts through selling land, George sold their family mansion to his wife Phoebe for one dollar because she had very little debt to her name. Unfortunately this quick fix would not save the Franks because Phoebe passed away just a few months later in 1900. The house transferred back to George. With no options left, he reluctantly sold his home to a local bank who auctioned off the furnishings and light fixtures. George Frank moved to Lincoln, Nebraska to be with his daughter Jeanie and her family. Several years later, they all moved back to New York where George passed away in March 1906.

After the Frank family departed Kearney, the bank needed to come to a decision on what to do with their newly-acquired Gilded Age mansion. For a while it was rented to the Branson-Camp family. After they left, the grandiose building once again stood empty for a few years. In 1907 Drs. Georgiana and Ole Grothan came to Kearney because they wanted to establish a clinic and long-term care sanitarium in the area. Needing a building for their planned sanitarium, the Grothans purchased the Frank’s former home in 1907 for $16,000 (equivalent to $445,000 in 2020). The Frank family home was perfect because it was large with multiple rooms, already somewhat modernized, and vacant. The mansion was remodeled and renamed the Grothan Elmwood Sanitarium. Ole served the sanitarium and community as a general physician, and Georgiana served as a fully-accredited obstetrician and children’s physician, and wrote several articles on the subjects. Around 1911, the Grothans divorced and Georgiana sold the house to the state of Nebraska for $24,000 (equivalent to $628,000 in 2020). This opened the door for the state to establish a hospital to try and address the tuberculosis “white plague” epidemic. 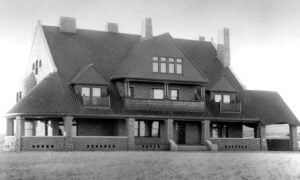 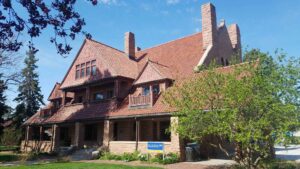 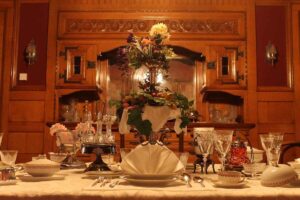 G W Frank Museum Dining Room
For centuries before the mid-1900s, many doctors believed tuberculosis could be treated with a combination of healthy food, fresh air, and sunlight. These reasons, coupled with the fact that the former Frank family mansion had already served the community as a medical sanitarium, led the State of Nebraska to choose Kearney as their tuberculosis hospital location. This particular hospital would fill a specific community need. Expensive sanitariums were available for the middle and upper classes. But for the working poor - who were the most at risk - that level of treatment was financially out of reach. The Nebraska State Hospital for Tuberculosis in Kearney was constructed to fill the gap. The Nebraska State Hospital for Tuberculosis officially opened in 1912. The area designated to serve as the hospital’s campus is currently the west end of UNK’s campus, and several of the original buildings still stand. The first building was the Frank family’s former mansion which residents, patients, and locals soon came to call “The Stone House” due to its exterior stonework. It served as a general administration building, living quarters for nurses and doctors, and housed some tuberculosis patients on third floor. All patients were moved into the first medical and treatment building of the hospital upon its completion in 1913. In the late 1930s and early 1940s, the building expanded under a Works Progress Administration (WPA) New Deal project. In early 1940, construction workers completed the last parts of the hospital’s expansion: the new central Administration Building, and a new Men’s Ward near “East Sun” – a wing dedicated to patient recovery. The expanded five-story building contained offices and admittance wards, along with an operating room, dentist’s office, laboratory, and x-ray room. That hospital building still stands and is now a UNK campus building named West Center, located south of the Frank Museum and currently home to UNK’s College of Business and Technology. 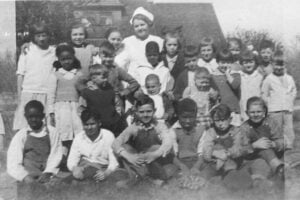 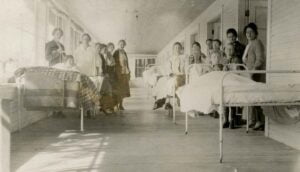 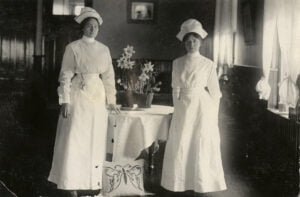 Nurses at Frank House TB Hospital
The Nebraska State Hospital for Tuberculosis closed in 1972, after the development of streptomycin - an antibiotic that proved effective at treating and curing tuberculosis. After the last patients were transferred to Kearney’s Good Samaritan Hospital, the Stone House once again stood vacant. Luckily, former Kearney State College (formerly the Normal School, currently UNK) President Brendan J. McDonald (served 1972-1982) wanted to establish a cultural center on campus. He decided the Stone House would be a perfect location, and the building was converted into a house museum for the first time. Its first curators, Halvin and Marian Johnson, worked diligently to convert much of the home back to its original 1890s design. The Johnsons stripped old lead paint and took down temporary walls installed by the hospital administration, raised money to replace the roof back to the Frank family-era Spanish-style tiles, and opened the front porch area. In 1973, the building was renamed the Frank House and was listed on the National Register for Historic Places. Marian Johnson gave public tours, and began working to collect histories associated with the building, mainly through reconnecting with people who had lived and worked in the house throughout the years. The building has operated as G W Frank Museum of History and Culture and has been a Kearney cultural center ever since.