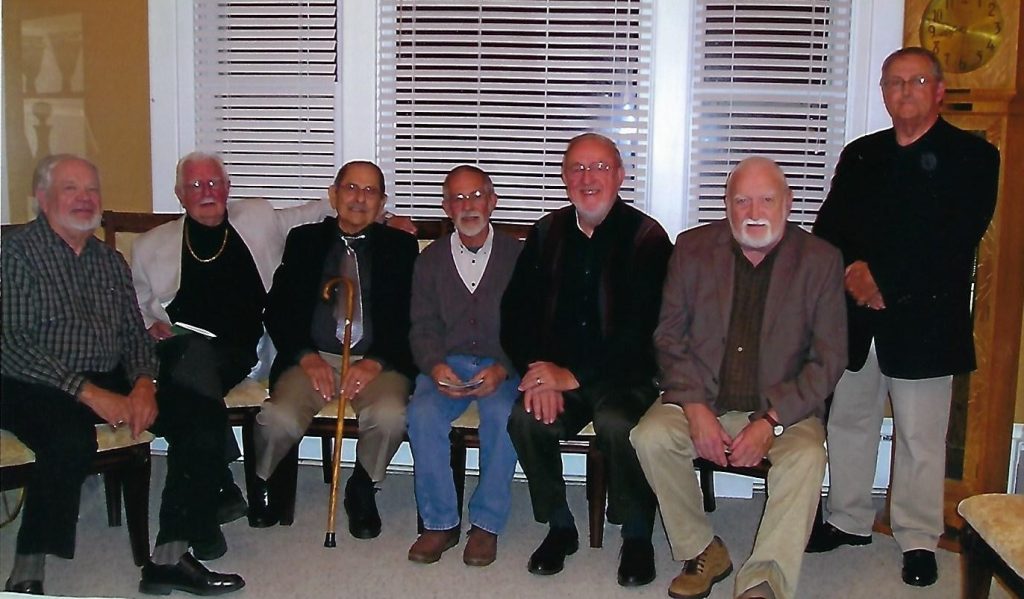 Photo: Then the Kearney State College, now University of Nebraska at Kearney Art Department. Pictured are Left to Right as you face the photo: Larry Peterson, Jack Karraker, Elmer Holzrichter, Keith Lowery, Ray Schultz, Gary Zaruba, and Kern Harshbarger. Larry, Jack, and Gary were the founders of the Nebraska Art Collection and the Museum of Nebraska Art. Elmer is the subject of the gala and this entry. It recently fell to St. Luke’s Church to draw the Holzrichter family and the Kearney area community together for a gala celebration-and auction-of Elmer Holzrichter’s art. In preparation for the evening, St. Luke’s Deacon Colleen Lewis prepared this account.

HOW THE HOLZRICHTER COLLECTION CAME TO BE AT ST. LUKE’S CHURCH

“It’s all your fault, Colleen! My dad used to tell me that a lot when I was growing up, but he always said it with a twinkle in his eye because he knew I hadn’t done anything. This time, though, it really is my fault. All of the artwork that can be seen in the St. Luke’s Bishop’s Hall is there because I was in the right place at the right time to meet the right person.

One day in mid-July, 2021, a visitor came to the Calvin T. Ryan Library on the UNK campus, where I work, asking to see Laurinda Weisse, the University Archivist. Laurinda was on vacation at the time and wouldn’t be back for another week, so I talked to him. It turned out that the visitor was Eric Holzrichter, son of the late Elmer Holzrichter, a retired art professor who taught at UNK when it was Kearney State College.

Eric was donating some of his father’s pieces to the UNK Archives. I told him I remembered Elmer, even though I never had any classes with him, and I’ve always loved his artwork. In fact, I have a small painting of Elmer’s hanging in my living room. I gave it to my parents as a Christmas gift many years ago, and it had recently returned to me because my mom died in May last year and left the painting to me.

Eric invited me over to the house to see more of Elmer’s works; he needed to find good homes for all of them. In mid-August I showed up on his doorstep one Friday evening and he took me next door to the Art House, which was filled with Elmer’s amazing creations.

Eric told me he was working on closing the estate and needed to distribute all these works of art. I said it was too bad he couldn’t donate them to St. Luke’s Episcopal Church. We were planning to hold a huge yard sale in Harmon Park in September, to raise money to install an elevator in the church. We could sell the artwork to help raise those funds. Eric said actually, we could do that; he could have the pieces appraised and donate them to St. Luke’s. His mother’s estate would receive a tax credit for the donations at the appraised value, and St. Luke’s would be able to sell the pieces to raise funds.

I took photos of several of the creations and the next day I told Mother Stephanie Swinnea, Rector of St. Luke’s, about this amazing opportunity to raise money for the elevator. She got really excited when I showed her the photos, and immediately began brainstorming how we could make this work. I arranged for Mother Stephanie to meet with Eric the following Monday evening so she could view the artwork herself. And the rest, as they say, is history.

Mother Stephanie and Eric negotiated the transfer; she selected the works, he obtained the appraisal, and I helped wrap them up and transport them to St. Luke’s. During those weeks we learned a lot about Elmer’s life and how he created beautiful works of art out of materials that most people would ignore or throw away.

Some people might think meeting Eric that day in the library was a lucky coincidence. But I see the hand of God at work in this. God provided the opportunity and means for a transaction that benefitted both parties. Eric was able to disburse a number of his father’s works to a good home while at the same time benefitting his mother’s estate. And St. Luke’s was able to acquire a means of raising needed funds, introduce this artist and his amazing works to many people who might not otherwise have heard about him, and at the same time help out Margaret Holzrichter’s estate. 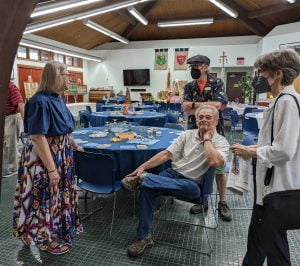 On August 26, 2022, St. Luke’s mounted a gala celebration and auction of the Holzrichter collection, with proceeds for the fund for an elevator for the parish. Some articles had been sold previously and St. Luke’s kept three of its favorites, but over 40 items went up for auction. Those attending enjoyed wine and cheese, soft drinks and fudge, and 40-some of them bid at both the auction and silent auction.

Eric Holzrichter was present, as were his sisters Bronwyn and Kathryn, as well as Kathryn’s husband, Chuck Welch. Some of the figures well-known in Kearney’s arts community who were present for the auction included Mike and Diane Sciachitano, David Wiebe, Kern Harshbarger, Evan Boyd-the new Dean of the Calvin T. Ryan Library, along with some of his staff, Karissa Johnson Olson, Curator at the Museum of Nebraska Art, collector Linda Anderson, and former colleague Larry Peterson. Larry and the family shared stories about Elmer and Margaret as a parent, artist, and colleague.

Auctioneer Francis Roberts described the collection as “common items given new definition,” and Mother Stephanie Swinnea called it “beauty seen in the ordinary.” For Elmer, the ordinary included many elements with which he had contact as a youngster in a poor family-the cardboard back of a Chief notebook which was his only annual drawing surface, the sisal baling twine that held the bales at harvest, the cardboard rolls in paper towels and toilet paper.

Cashier David Clark figures the items brought an average of $100 each, some of course cheaper, and some going for several hundred dollars. Elmer may have summed up his philosophy of art in his own poem, “The Dance.” 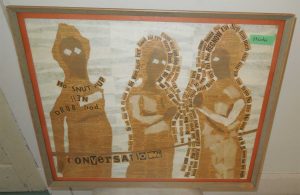 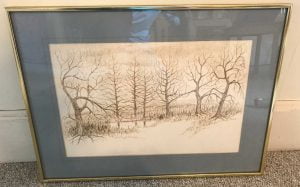 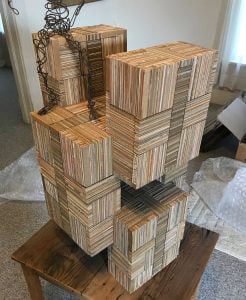 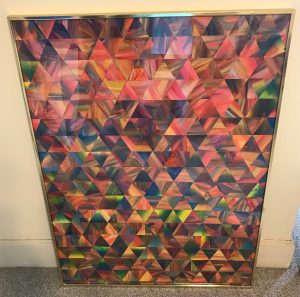