At the Buffalo County Historical Society - Trails & Rails Museum, we preserve local history every single day. In many cases, our county’s history revolved around the prominent art and cultural aspects of our communities. And the Annual Wagons West Festival celebrates our common culture, featuring a community run, exhibitions of pioneer living, bluegrass music and more. 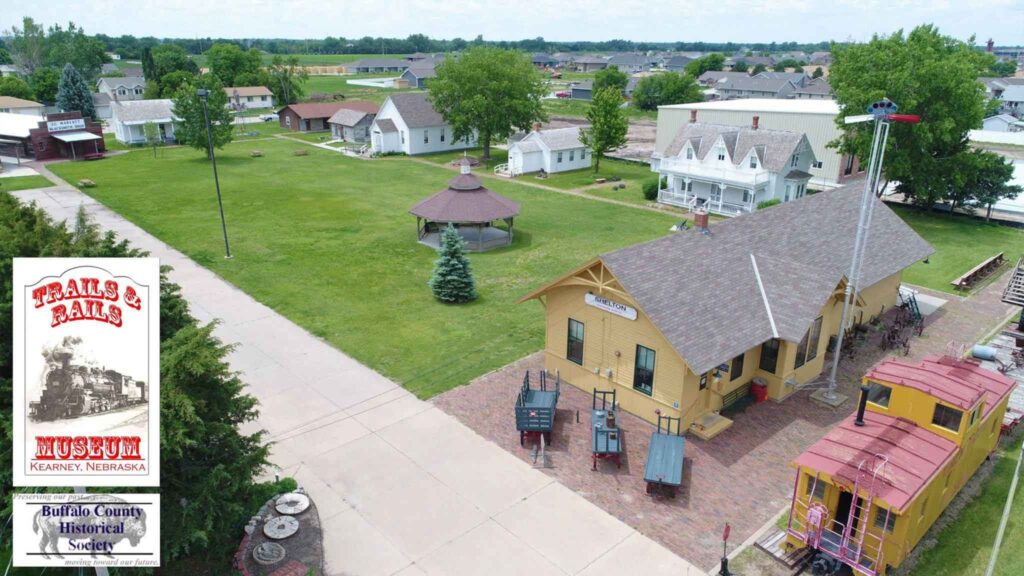 At the Buffalo County Historical Society - Trails & Rails Museum, we preserve local history every single day. In many cases, our county’s history revolved around the prominent art and cultural aspects of our communities. Between Lyman Rice’s paintings and Anderson photographs in our archives, it is hard to pinpoint just one specific art and culture topic to discuss. But for me, the best example in recent years is how far we have come in preserving Buffalo County history and what we all do here at Trails & Rails Museum, especially the renovation project of the Kearney Opera House Curtain. We took on a monumental project to restore it with the help of the Kearney community, University of Nebraska at Kearney, and other grant monies.

What we refer to as the Opera House Curtain here at the museum came from the downtown Kearney Opera House. Originally located on 21st Street and Central Ave, the Kearney Opera House was built in 1891 at the peak of Kearney’s boom period. The five-story structure represented the quickly progressing community that had so much potential early on. Many well-known persons, such as William Jennings Bryan, Carrie Nation, Harry Houdini, Otis Skinner, and other prominent performers came from all across the country to the Opera House. By the 1920s, the early success and stardom shifted toward a struggle to keep the doors open. Instead of the national and international spectacles it once had, the Opera House soon gave way for cheap movie nights and less prominent performances by local drama clubs and musicians. The last official stage event came in 1932 and then it was to sit vacant for over twenty years. Only the offices on the main level were largely utilized until the final demolition of the building came in 1954. Now located where Bruce Furniture is today, the Kearney Opera House is loosely remembered by some of locals who briefly were inside or recall when the building was torn down.

Fast forwarding into the twenty first century, the Opera House Curtain hung half–unrolled for years in the third room of the Shelton Depot. Being such a large canvas of painted business advertisements and of a mountainous and moon scene, only a small part of the top could be seen by guests, volunteers, and staff alike until more proper display space was constructed in the future. In the summer of 2017, Phase 1 construction of the Family History Center not only provided more office and conference space for staff and volunteers, but the improvement to BCHS archives was an important priority. In deciding what to move over from the previous archives, plans were also specifically adjusted to accommodate the large curtain that stands roughly 30 feet W and 24 feet H. In addition to the large wall space reserved for the display, a viewing window from the Study Center was part of the overall plan for researchers to peek into the archives as they peruse through archival materials. Finally, in November 2017, the Opera House Curtain was officially unrolled and plans for its restoration and research followed in the months ahead.

Between special grant monies and the local connection to the University of Nebraska at Kearney, research and restoration quickly took off. Grant money from the Theodore G. Baldwin Foundation allowed BCHS to reach out to Paintings Conservator, Kenneth Be from the Ford Conservation Center, to restore the original look to the oil pastel canvas. With Be’s expertise, BCHS volunteers and staff and students from UNK had the opportunity to learn about the various techniques and best practices in handling and restoring the curtain. Additionally, students from Dr. Jinny Turman’s Community and Preservation class extensively studied and researched the various businesses and advertisements on the curtain. From this class research, we were able to determine that the curtain was hanging up in the Kearney Opera House by the late 1920s, was based on the various phone numbers, physical addresses, and names of businesses of that time.

After a series of press releases, word got out about the BCHS Opera House Curtain project. We were proud of the work and efforts made to restore most of the curtain’s original look, and proudly hung it in our Family History Center Archives. Once the curtain was hung, we then held an event celebrating all the research and restoration of the curtain. At this event, the public was invited to see William Jennings Bryan, Carrie Nation, and Harry Houdini come back to life for a special program. In addition to this single event, the Opera House curtain is still widely seen by all who come to the Trails and Rails Museum. When guests take a tour at the Trails & Rails Museum, the Opera House Curtain is one of the last highlights of the tour. In a behind the scene peek into the archives, guests follow the red carpet, take a seat on of the of the old court house benches, and bask in the curtain’s beauty. Often times, guests reminisce on what it would’ve been like to watch a play if it were still standing today. At the same time, the surrounding archives encapsulates how and why we have the curtain today and serves as a constant reminder as to why our Buffalo County History matters. The Opera House Curtain now prominently hangs for public viewing where it’ll stay for many years to come.

"Our mission to continue preserve Buffalo County history is not over. Since 2018, we now have eight other curtains that we are hoping to get on display all around the Family History Center archives in the near future. We also have many more items that belong to other artists, photographers, and more that we hold on dearly for future generations." ~ Broc Anderson, BCHS Community Engagement Director 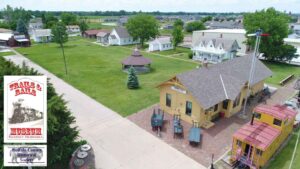 Overhead View of Trails and Rails Museum in Kearney NE 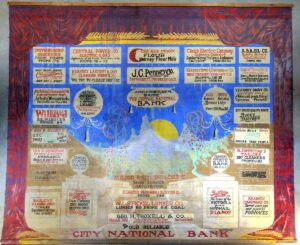 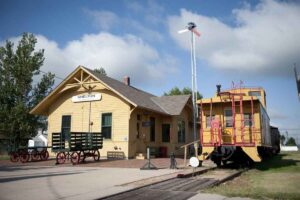 West 11th Street, Kearney, NE, USA
The object of this Society shall be to bring together those people interested in history, and especially the history of Buffalo County and the State of Nebraska. Understanding the history and preservation of the history of our community is basic to our democratic way of life and gives us a better appreciation of our American heritage.